The Great Lakes of East Hokkaido

The world class scenery of the Akan–Mashu National Park (NP) makes it a wonderful adventure and nature playground. Its eastern half is dominated by an enormous caldera and two extremely beautiful crater lakes, Kussharo and Mashu set amidst a landscape that is among the finest in Japan.

Lake Kussharo is a year-round beauty spot. The scale of the Kussharo Caldera, in which the lake is set, is best grasped in its entirety from panoramic viewpoints at Bihoro Pass on the western rim and Koshimizu Pass on the flank of Mt. Mokoto on the northern rim. Time and the forces of erosion have degraded the caldera’s eastern rim leaving it poorly defined, and other, smaller volcanoes have intruded to add yet more drama to the land; however, look westwards from the viewpoints at nearby Lake Mashu and you will grasp the enormity of the scene.

Lake Kussharo, in the municipality of Teshikaga, is not merely the largest caldera lake in the Akan–Mashu NP, but also the largest caldera lake in Japan, and Japan’s sixth largest lake of any type. It is situated at an altitude of 121 m above sea level, has a surface area of just over 79 km2, a shore length of 57 km, and an average depth of 28.4 m, although it reaches a maximum depth of 118 m. This great lake is broken by one island, Nakajima, and the prominent Wakoto Peninsula that juts northwards from the lake’s southern shore. A pleasant woodland trail around that peninsula provides a 'forest-bathing' experience that, on warm summer days, includes not only delightful birdsong, but also the strange repetitive buzzing onomatopoeic sounds of the Min-min Cicada. At the base of the peninsula, hot spring bathing is possible at a pleasant outdoor pool, and, if you take a guided canoe trip onto the lake itself, you will see the steaming vent at the waterline at the tip of the peninsula and perhaps even cook your lunch there in a natural geothermal steam oven!

In winter this enormous lake may freeze over almost entirely. Geothermal vents along the eastern and southern shores keep portions of the surface water ice-free, while elsewhere snaking cracks and pressure ridges of ice are special seasonal features. Ice free areas and the provision of winter food entice small flocks of Whooper Swans to winter here. These large, highly vocal, birds appear ethereal in the early morning mist rising off the tiny strips of open water, and their beauty has earned them the sobriquet Angels of Winter.

Migratory Whooper Swans are common winter visitors to Japan from their breeding grounds in boreal eastern Russia. Some linger to winter at Lake Kussharo where they can find ice-free areas in which to feed. They are most famously seen and photographed at Suna-yu on the lake’s eastern shore, where geothermal activity warms the beach and keeps a strip of water ice free. In summer, the busy sounds of the local Suna-yu campsite take over from the clamouring of the swans, as this is a popular base for recreation, exploration and activities. Another attractive campsite is situated at the base of Wakoto Peninsula.

The single outflow arising from Lake Kussharo — the Kushiro River — is no trickling stream. It emerges fully formed, as a broad river, from the lake’s southeast corner passing beneath the Chōko Bridge then wends its way southward to join the Pacific Ocean at Kushiro City. This shallow, forest-fringed river is popular with both canoeists and fly fishers.

Nearby, Lake Mashu, 'the lake of the sprits in the mountains’ to the indigenous Ainu, is an essential element of a visit to East Hokkaido. Two viewpoints, situated on the western side of the Mashu crater rim provide panoramic views of much of East Hokkaido, making this one of the greatest scenic spots on the island. To the west lies the Kussharo Caldera with Lake Kussharo and further on, to the southwest, stand the Akan volcanoes; to the northeast is Mt Shari, with the Shiretoko Peninsula beyond. Far to the south lies the Pacific Ocean. When the weather is kind, the panorama is truly spectacular.

Lake Mashu is picture perfect. It is considered to be the most beautiful of all Japan’s lakes. On sunny days its water is an astonishingly clear sapphire-blue, a colour emulated in the Mashu Blue cocktails available in local bars. Steep internal cliffs encircle and rise 200 m above the lake, while the pumice covered floor of the crater lies 211 m below. Rainwater falling within the caldera accumulates into the lake and is lost by seepage down through the volcano and by evaporation — no streams or rivers flow out from this lake. The lake is completely remote in the sense that there are no access trails down to the shore from the crater rim and hence there is no disturbance of the lake. Mere mortals may not disturb the home of the gods.

Looking eastwards, the clear waters of Lake Mashu and its surrounding forests beautifully frame the vista of Kamui-nupuri, the mountain of the sprits (also known as Mt Mashu; 857 m). This peak rises steeply and jaggedly from the southeastern shore of the lake and makes a fine destination for a day hike along the caldera rim from the first Mashu viewpoint. Looking northwestward, in the near distance, you will notice several low, round-topped ‘mountains’ with one more rugged than the others this is Mt. Io (or sulphur mountain, 508 m).

Steam billows and gushes constantly from the flank of Mt. Io (Atosa-nupuri in Ainu – meaning the naked mountain). This fascinating geological spot with its dramatic springs bubbling boiling water, spouting steam and condensing jagged intense neon-yellow heaps of pure sulphur, lies just south of the small town of Kawayu Onsen. It is easily reached by bicycle or car, but an enticing nature trail extends there from the town via Tsutsuji-ga-hara where, during May, June and July, the frothy white flowers of the Milky Way Rhododendrons carpet the area and contrast beautifully with the dark green of the low-growing Japanese Stone Pines. Beyond this special ‘flower garden’ the mountain is bare. The scene is wild and dramatic in winter.

Marked seasonal variation in climate here sees summer temperatures soar above 30°C and winter temperatures dip below –30°C. In spring and autumn forests surrounding the lakes are rich and colourful with seasonal foliage. In winter, the lakes may freeze over and the intensely cold, dry atmosphere then lends itself to the production of beautiful hoar frost, which coats the trees around the hot springs, and tantalising diamond dust (fine, barely visible crystals of ice drifting on the breeze). In summer, the lakes may be filled with a sea of clouds, presenting yet another delightful aspect. At any season the region is a delight. 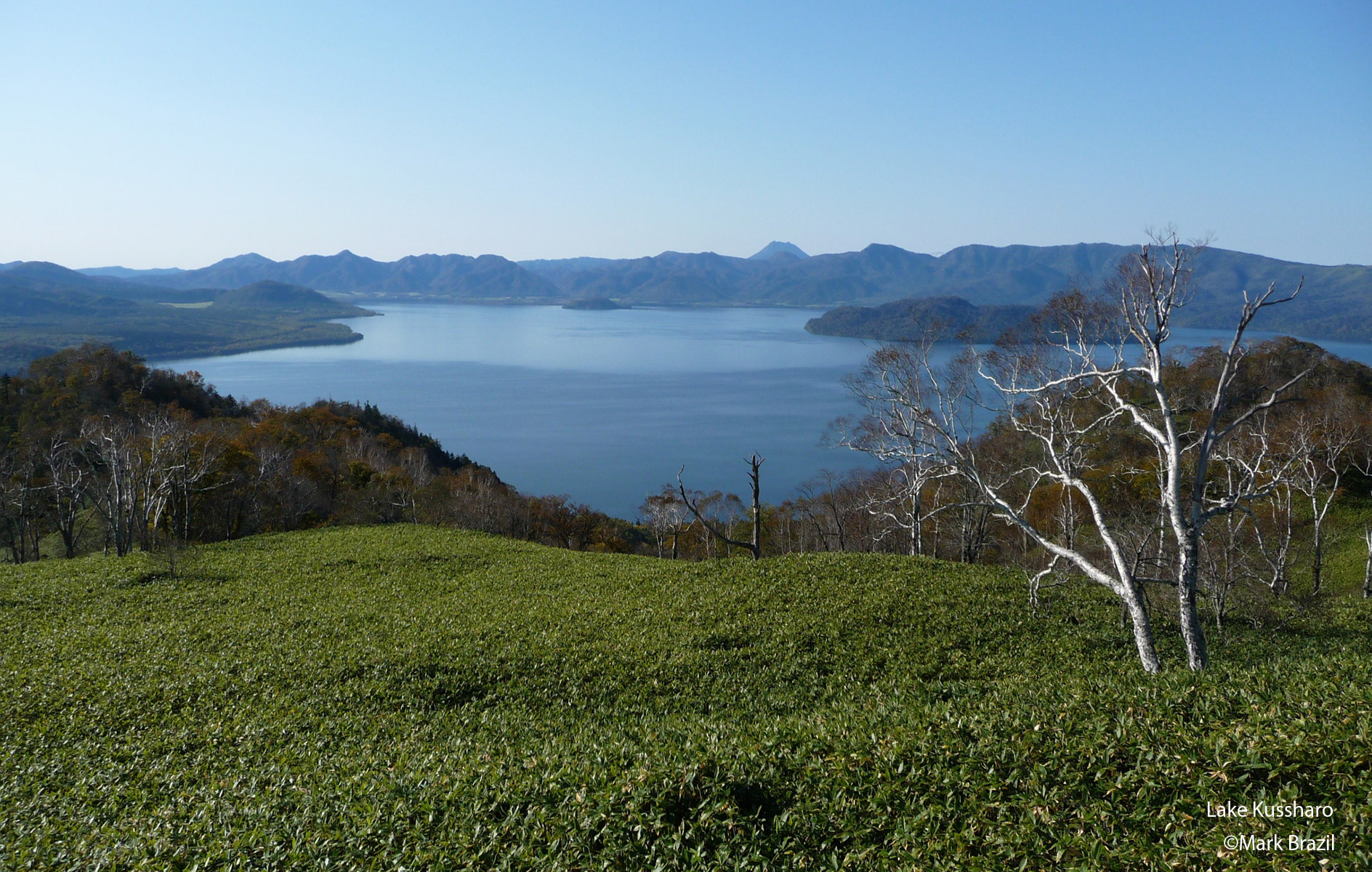 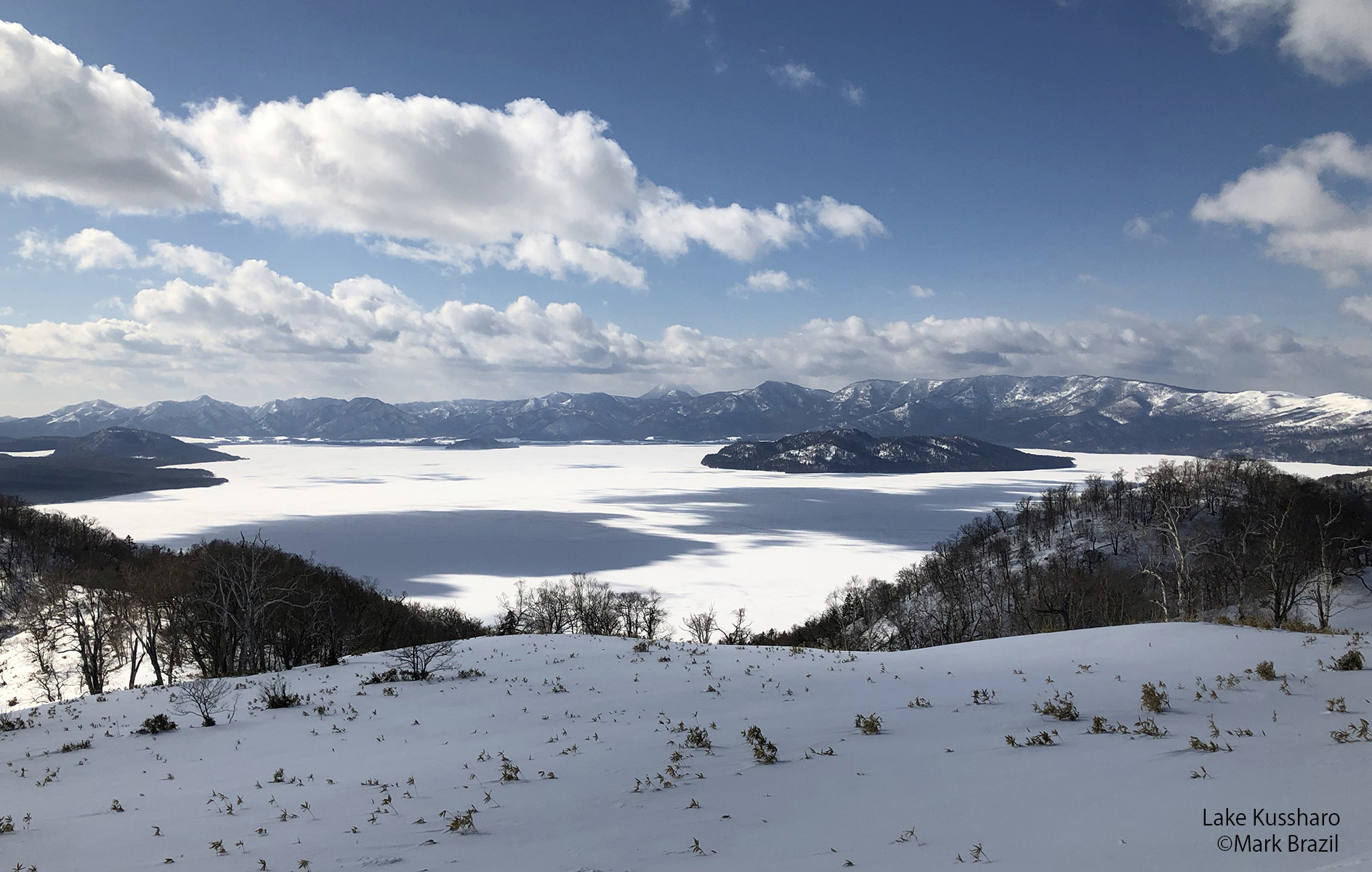 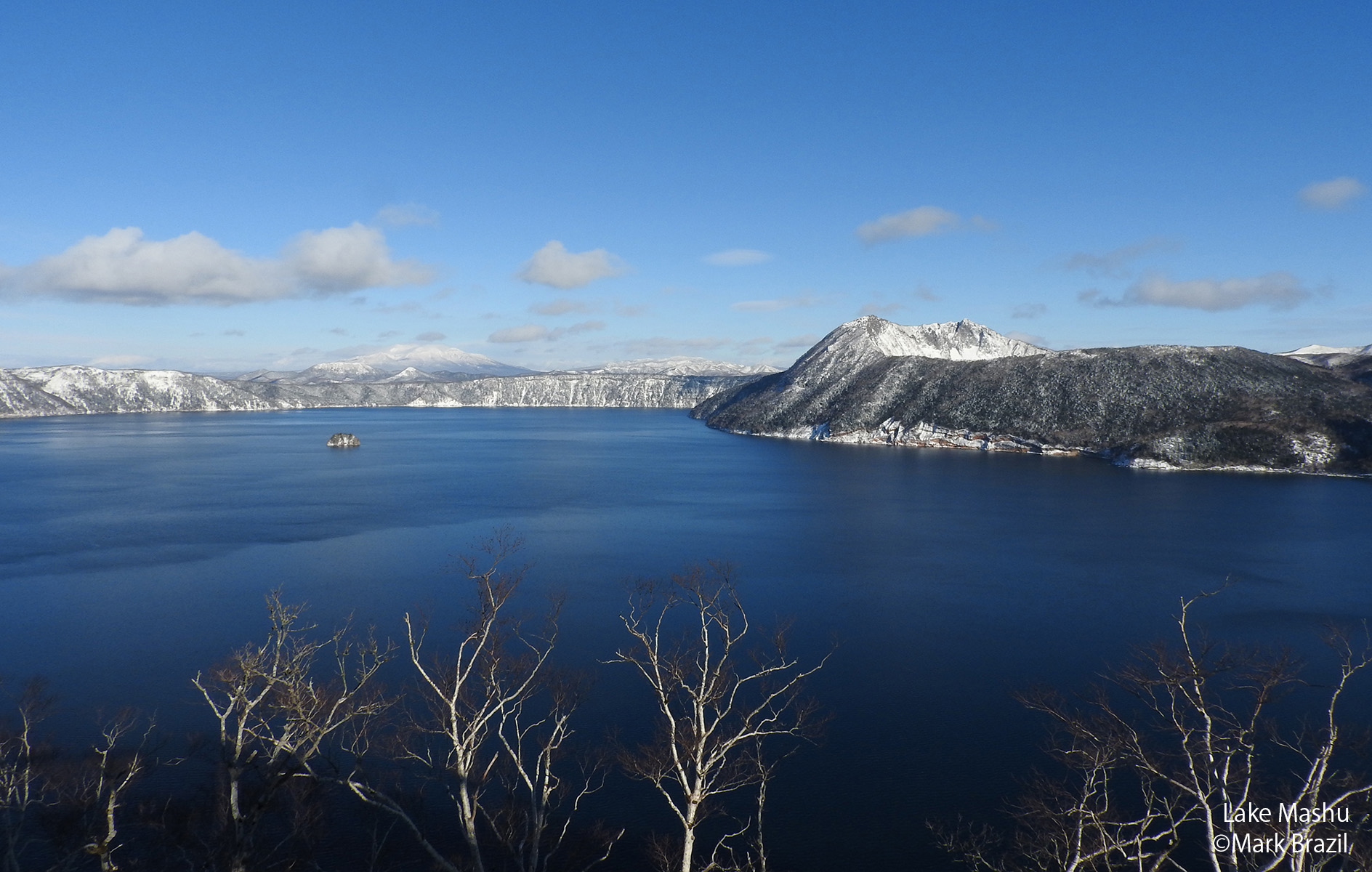 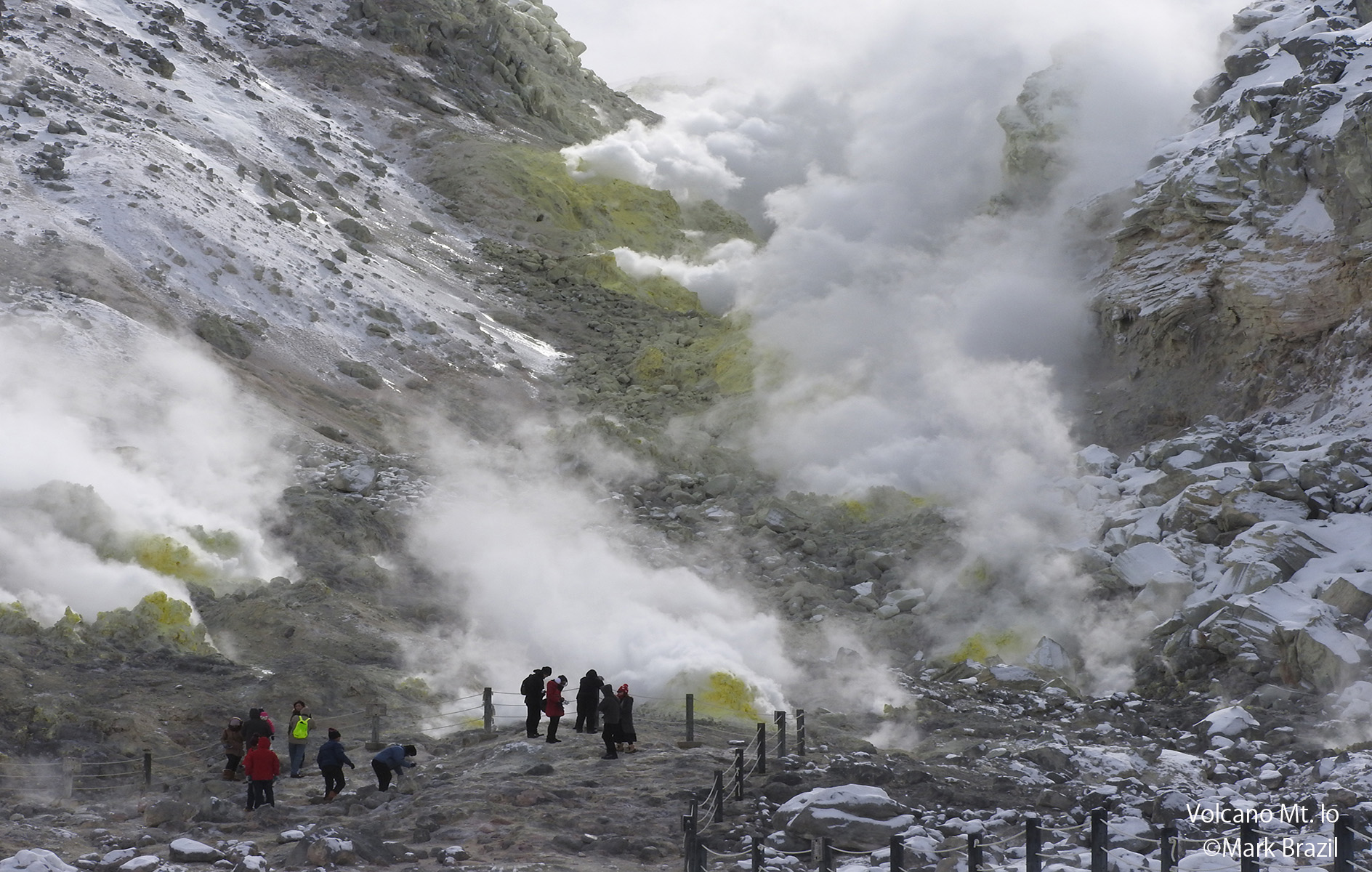 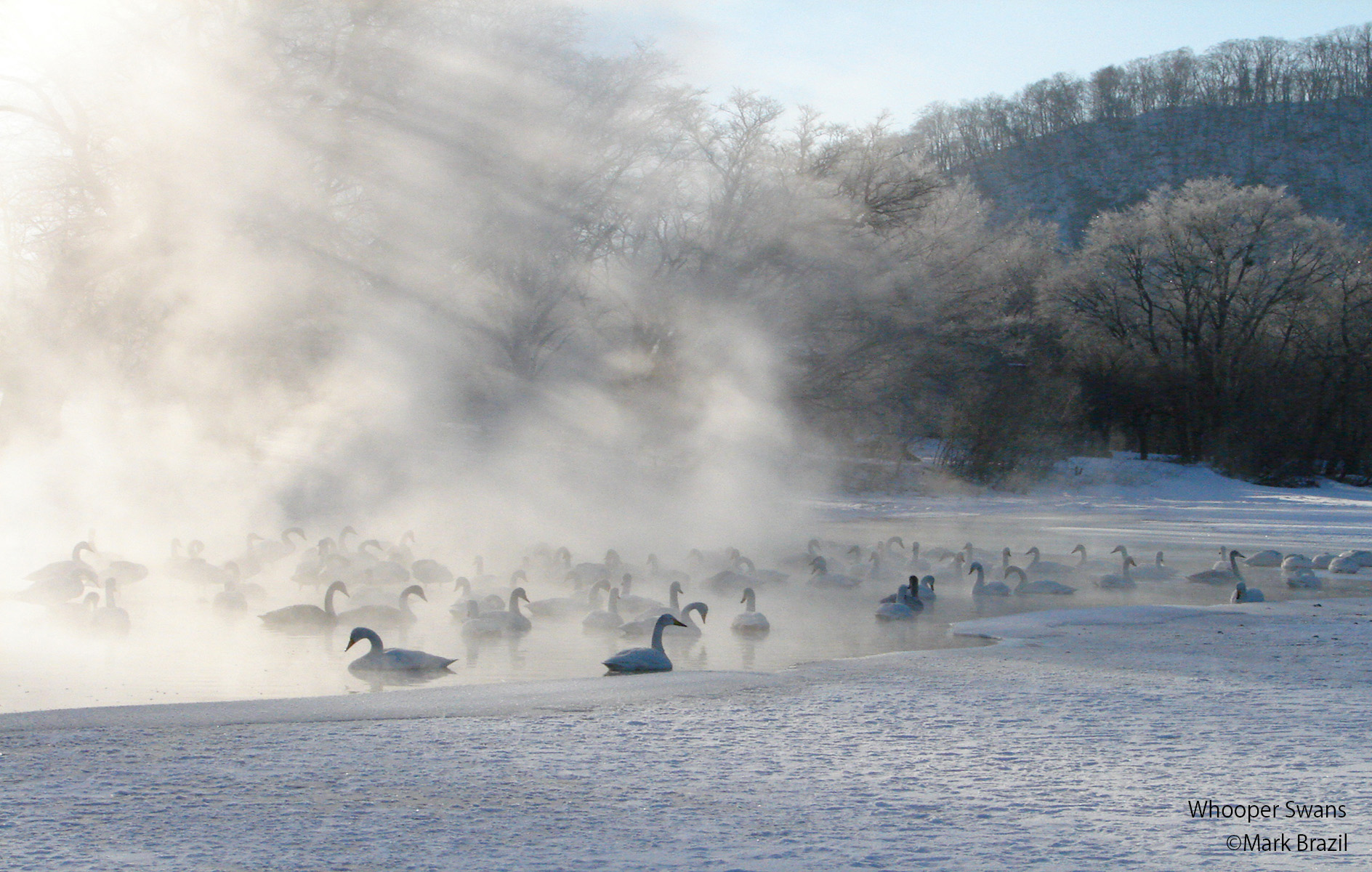 Take a tour to Viewpoint 3 of Lake Mashu and see a vast sea of clouds over the Kussharo caldera, the largest caldera in Japan. If the season and conditions are right, you'll see another sea of clouds covering Lake Mashu, and if you're extra lucky you might even see mist drifting over Lake Mashu, creating a magical scene. *If booking at short notice, please inquire by phone to Tourism Teshikaga: 015-483-2101

With no mountains blocking the view, the area around Lake Mashu offers an incredible 360-degree view of the stars at night. If you're lucky, you might even see a shooting star or a satellite. Even on nights when the stars cannot be seen, you'll get to experience the great outdoors in the depths of the night with all five senses - you can learn about the constellations, see Lake Mashu glinting in the faint starlight and look out at the nightscape of Kushiro in the distance. *If booking at short notice, please inquire by phone to Tourism Teshikaga: 015-483-2101

In addition to trekking through the pasture on horseback, you'll get to saddle up by yourself, with a guide teaching you everything you need to know. Megere Farm's most popular trail leads through the forest and down to Lake Kussharo. Your horse might even stop to drink from the lake! A child under 90cm tall can ride with you for an additional JPY1,000. *Please contact Tourism Teshikaga by phone (015-483-2101) if booking at short notice. *Please note that there may be occasions when this tour is fully booked, even when booking in advance.