The national parks of East Hokkaido offer tremendous scenic diversity and a wonderful backdrop for outdoor adventures. The counterpoint to the enormous calderas, crater lakes and stunning volcanoes of the Akan–Mashu National Park (NP) is the serene scenery and the broad vistas of lowland Kushiro Shitsugen NP.

It is all about the river. The Kushiro River arises, fully fledged, from the southeast corner of Lake Kussharo in the Akan–Mashu NP and traces a meandering 154 km path southwards across the Kushiro Plain and Kushiro Shitsugen NP to the Pacific Ocean at the coastal city of Kushiro (population c 166,000). The lower third of the river forms Japan’s largest wetland (22,070 ha), which extends 36 km from north to south and 25 km from east to west. The entirety of central Tokyo could be lost in this wetland.

What is now an enormous peaty mire was once, several thousand years ago, merely an inlet of the sea. As the sea retreated, the silt from the volcanoes to the north created first a swampy saline delta. The ongoing process of ecological succession has allowed a steadily shallowing brackish wetland to develop three main vegetation types — peat bog, reed-sedge marshland and alder-dominated swamp forest — in an ecologically dynamic association of freshwater habitats.

During summer, monogamous crane pairs occupy large wetland territories, build an enormous ground nest, produce two white eggs and raise their chicks. From midsummer onwards the crane families wander away from their lush green nesting areas and along streams and wetland edges in search of food. In autumn, as the wetlands cool, the crane families forsake their breeding grounds and gather in ever larger groups. Ultimately, they move to nearby wintering grounds where flocks of 100 or more birds congregate. Three important viewing sites north of Kushiro, two in Tsurui village (the Tsurui Ito Tancho Sanctuary and Tsurumi-dai) and one in Akan town (Akan Tancho no Sato), make it possible for visitors to watch and photograph the cranes at very close range.

Crane pairs duet and dance, as they engage in winter courtship displays that serve to re-kindle and reinforce their pair bonds in readiness for their breeding season ahead. Few sights are more inspiring, or photogenic, than the spectacle of graceful monochrome cranes leaping, dancing and pirouetting in a gently falling snowfall like snow ballerinas on the fringe of Kushiro wetland. Kushiro draws thousands of visitors each winter determined to watch and photograph the stately cranes on their feeding grounds. But there is much more to Kushiro than cranes alone.

Viewpoints to the west (near Hokuto) and east (near Hosooka) provide wonderful opportunities to grasp the enormity of the beautiful landscape of Kushiro Shitsugen NP. The broad Kushiro River winds and glints below the Hosooka viewpoint, and far off on the horizon to the north-west stand the Akan volcanoes. At the western end is the conically shaped peak of Mt Akan-Fuji. Immediately to its right is the constantly active, compact massif of Mt.Meakan billowing steam from vents high on its flanks. Farther off to the right of Mt.Meakan stands another large isolated volcano, Mt.Oakan.

In winter, a steam locomotive travelling between Kushiro and Shibecha makes a nostalgic sight as it puffs its way along the eastern flank of Kushiro wetland directly below the Hosooka viewpoint. It is perennially attractive to riders on, and photographers of, such trains. There are excellent vantage points at railway crossings near Rt 391 and viewpoints beyond Lake Toro.

In winter the landscape appears bleak, snow-covered and windswept. The land, the lakes and the streams are all frozen hard, the whole area is white with snow and the soundscape at this season consists of the brash grating sounds of ice flowing down the river, brittle reed stems rattling, frosted river ice cracking, and the soughing of the wind. In the brief spring interlude between winter and summer, impressive cries echo across these marshes, they are the powerful duetting calls of the graceful cranes, but there are other exciting entities to look for in addition to cranes and trains.

Japan’s commonest large mammal, the Hokkaido Sika Deer, is at home in the wetlands, woodlands and agricultural fields of Kushiro, as too is the ubiquitous Red Fox — a scavenger and predator that is often sighted during daytime in east Hokkaido. Occasional barking calls indicate not a fox but a magnificent, White-tailed Eagle, with a two-metre wingspan soaring lazily overhead and proclaiming its territory. Eagles can be seen year-round here, as several pairs nest in tall trees commanding broad views across the wetlands, rivers, and lakes of the region. In autumn their numbers are supplemented by birds arriving from eastern Russia to spend the winter months here.

In spring, the pleasing mixed forests here are open, airy and seem exposed. By summer they are carpeted with lush knee-high green vegetation. On the forest floor the large, pleated leaves of the White Hellebore and the tiny blue bell flowers of Blue Corydalis are prominent. On sun-warmed wooded slopes there are snowy blooms of White Trilliums. In May, the otherwise drab forest is dotted with blooming pink mountain cherry trees and white flowering magnolias just as some forest trees are beginning to open their first leaf buds. Bright yellow Common Dandelions line the roadsides, and the soon the forest floor is carpeted with the large rhubarb-like leaves of the Japanese Butterbur, and the rustling leaves of dwarf bamboo – the dominant ground cover in Eastern Hokkaido. Later in the year there are tall blue Japanese Gentians and Hokkaido Monkshoods, lanky yellow Alpine Ragworts, and the towering, nodding spires of Bugbane.

On misty summer mornings Common Cuckoos can occasionally be seen flying across the wetlands, or heard giving their far-carrying onomatopoeic calls, and the reed beds become noisy with chattering Black-browed Reed Warblers. On cool summer nights, Red-bellied Brown Frogs can be heard calling from the wetlands below while Latham’s Snipe produce the bizarre sounds of their courtship displays in the air above.

The wetlands provide welcome opportunities for relaxation and recreation, for experiencing the healing sounds of the wind, the rustling reeds, the summer bird song, and for feeling the wellbeing derived from relaxing natural movement.

Canoeing on the lakes and rivers has become popular, and hiking, cycling and horse trekking on the tracks and trails are increasingly attractive. All are low-impact non-polluting activities that offer ‘slow time’. It is well worth following the course of the Kushiro River from where it arises from Lake Kussharo, leaving behind the stunning scenery of volcanic peaks and crater lakes to enter the slow, quiet world of the river. Or, begin near Lake Toro to follow the broad lower reaches of the forest-fringed river and to experience the greatest expanse of wetland habitat that remains in Japan. An enormous fish, the Japanese Huchen, lives here, as do three cold-adapted native amphibians, and as many as 48 species of dragonfly. There is so much to look for and so many ways to experience Kushiro. 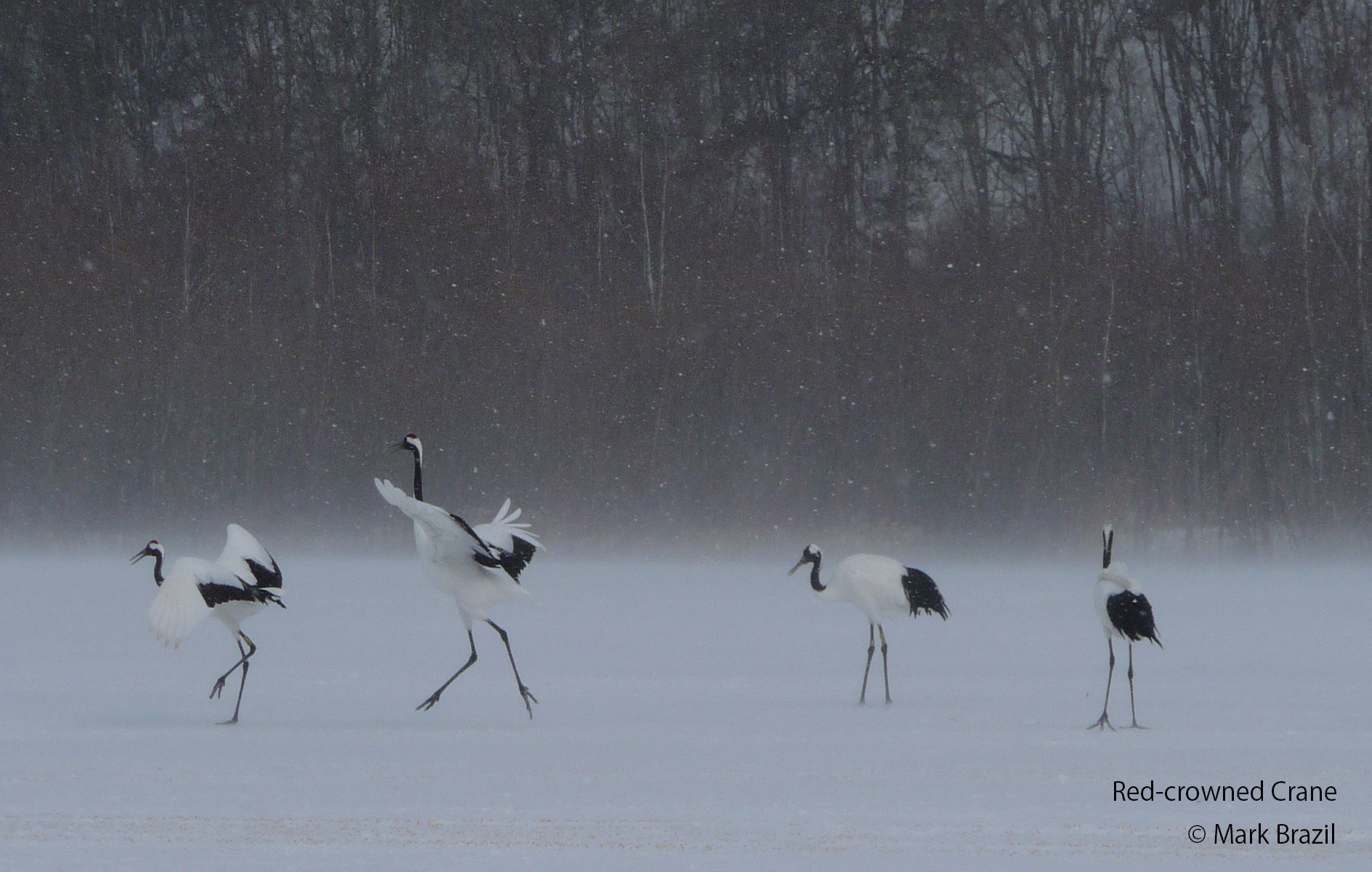 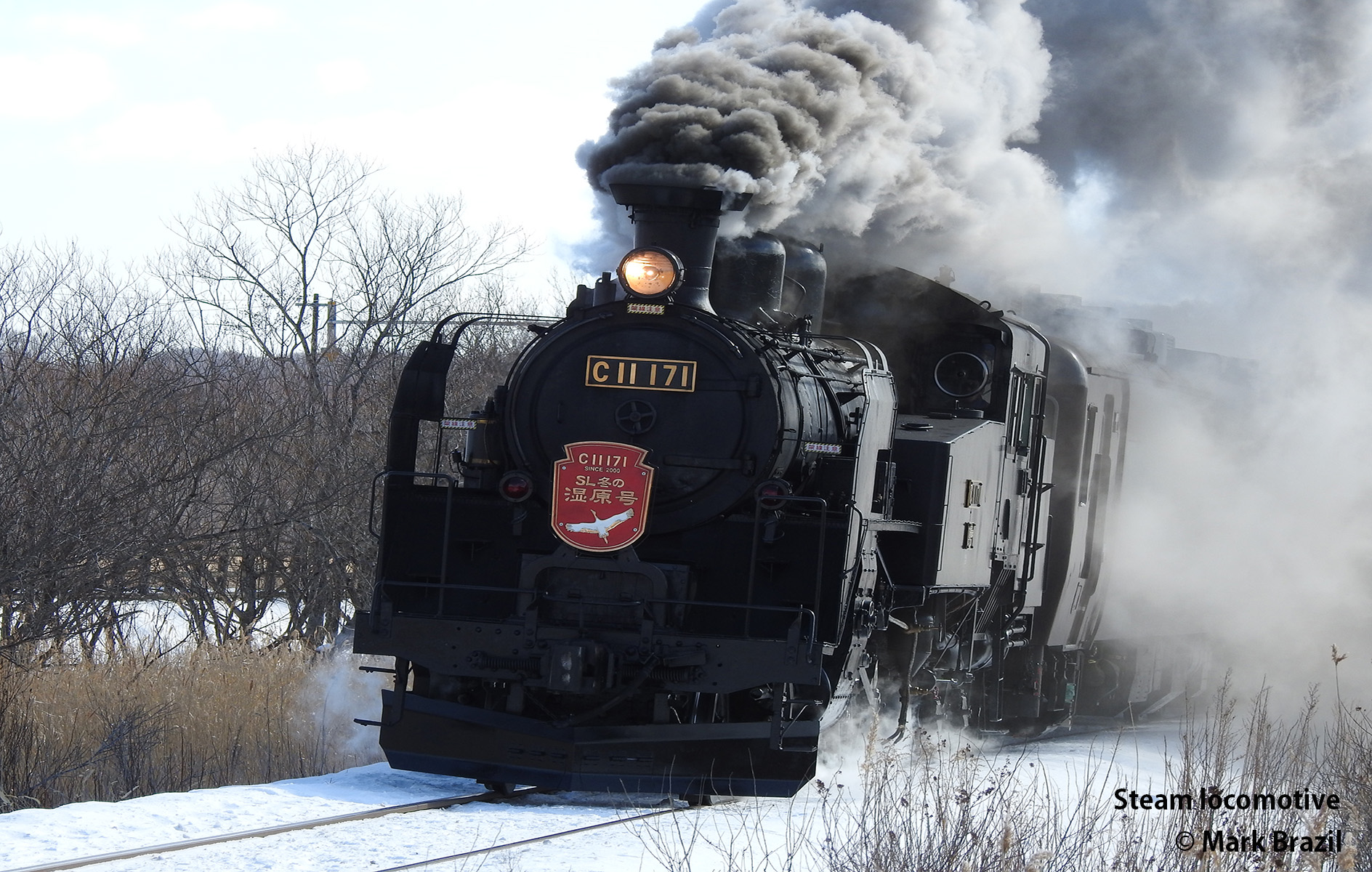 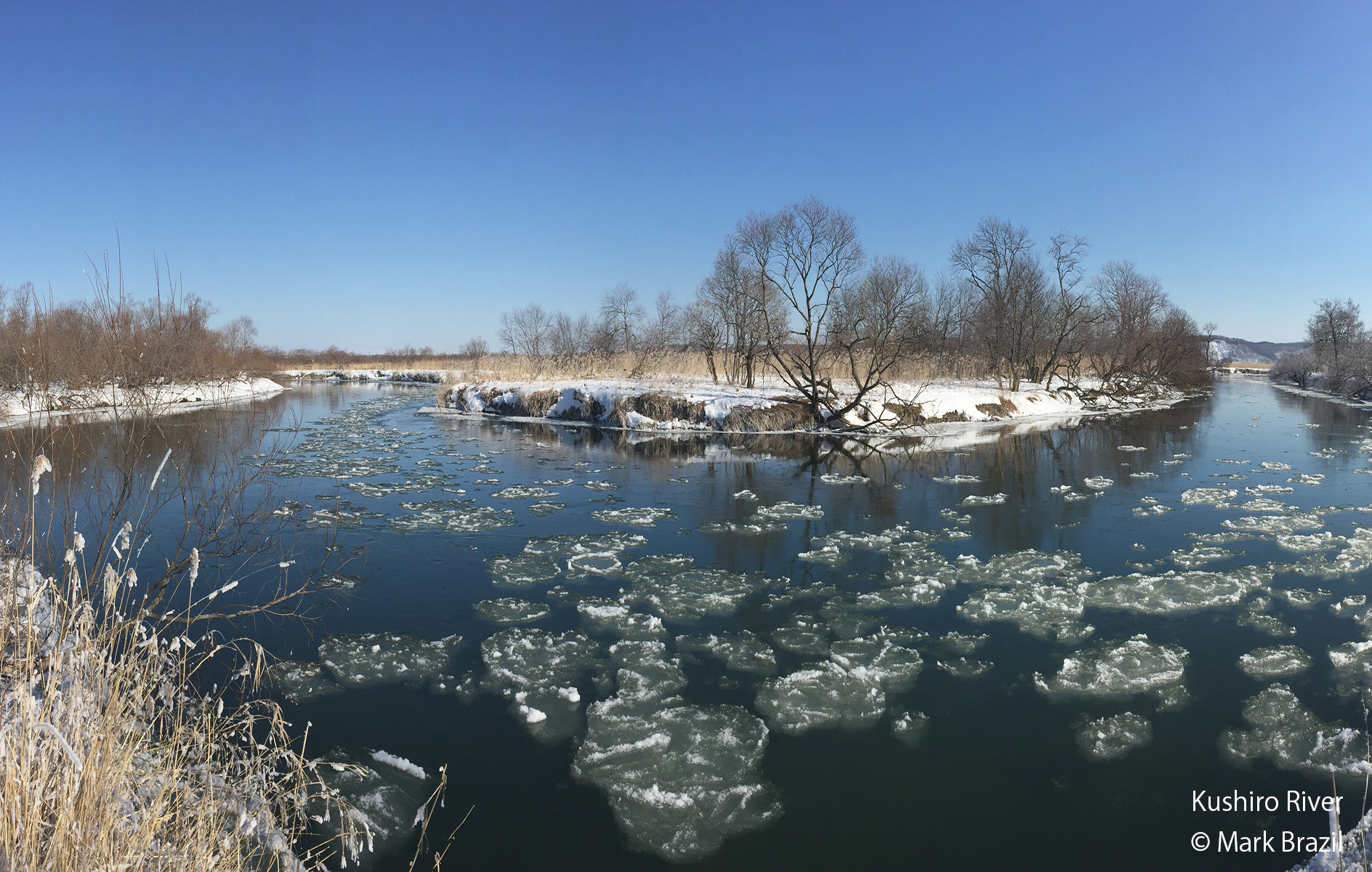 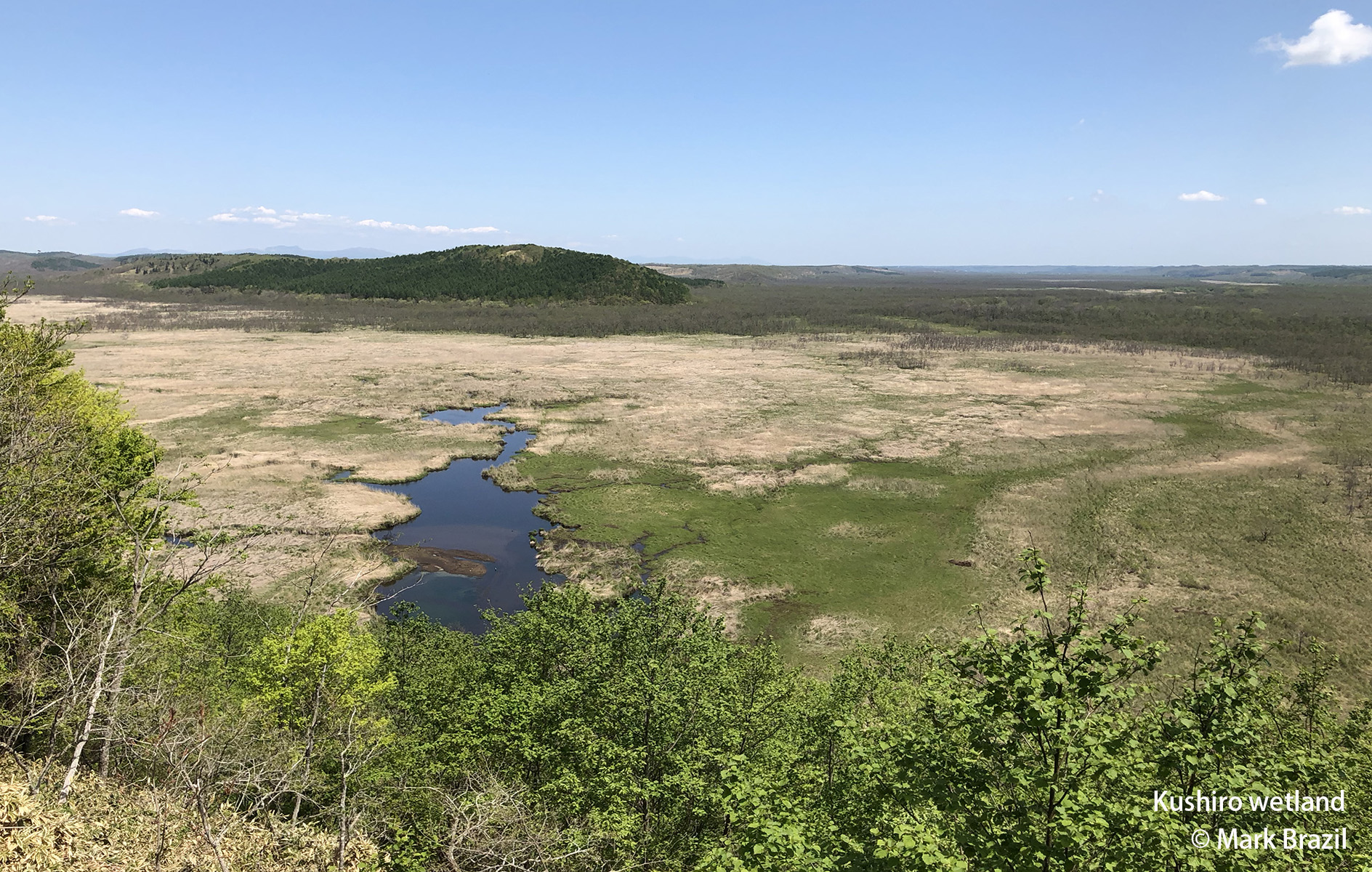