The Akan–Mashu National Park makes a wonderful base for an outdoor activity-focussed vacation with an additional infusion of Ainu and Japanese culture. Its intensely active geological history and stunning volcanic countryside mean that the scenery here is among the finest in Japan — in fact it is world class.

Among the very first national parks to be designated in Japan (in 1934), Akan–Mashu is widely considered to be Japan’s most attractive. From the peak of the Mt. Meakan (1,499 m) stratovolcano, in the western portion of the park, the view is stunning. That vista takes in the billowing steam vents and craters of the Meakan massif itself, the adjacent cinder cone of Akanfuji (1,476 m) to the west, and skyline-dominating Mt. Oakan (1,370 m) some 15 km to the northeast, along with beautiful Lake Akan. It is only because of its relative isolation and prominence that Mt. Oakan appears to be the taller of the park’s volcanoes, although in fact that accolade goes to Mt. Meakan.

Excellent rugged trails make the three volcanic peaks readily accessible to avid hikers for much of the year, while an easy trail along the Lake Akan shore extends far enough for a pleasant afternoon family stroll from the lake side community to the strangely named bokke. The day-long hike up from Lake Akan over the Meakan and Akanfuji peaks and down the other side to Lake Onneto affords spectacular views at any season, especially in autumn when paint box colours add drama to the scenery. The bokke walking trail leaves the complex of modern hotels and reaches an unusual geological site where there are several small naturally bubbling mud pots or mud springs. Pools of sloppy substrate heave and spit as steam and gas rise creating glutinous bubbles of mud that form and burst at the surface in a mesmerising slow-motion effervescence. The local name, bokke, imitates the sloppy popping sound of bursting mud bubbles.

Akan is a centre for multi focussed tourism with an emphasis on the outdoors. Whether mountain hiking, forest walking, fly fishing, ice fishing, mountain biking, snowshoe trekking or cross-country skiing are your thing, all are possible here at one season or another.

The Akanko Onsen on the shore of Lake Akan is an important base. It is famed for its hot spring hotels, its scenic views, and for being the focal point of the local Ainu community (the indigenous people of Hokkaidō). Ikor, the theatre here, showcases Ainu culture, music and dance, in performances given each day by representatives of the Ainu community. Their traditional dances have been designated nationally since 1984 as an Important Intangible Folk Cultural Property and internationally since 2009 as Intangible Cultural Heritage of Humanity by UNESCO. The street sloping up to the theatre is lined with workshops offering a wide range of traditional craft items, Ainu designs, and some serving Ainu food. During the daytime, Ainu-guided tours focus on the cultural wisdom of the people that have long lived in the natural environment of this boreal region.

Hundreds of thousands of years ago, long before the Ainu occupied Hokkaidō, an enormous, towering volcano erupted here and formed the vast Akan Crater which eventually filled with a great lake. Today’s Lake Akan dates back only 10,000–15,000 years and it is confined between two small active volcanoes. Large though the lake seems, it is merely a small remnant of a once far greater lake. The eruption that formed Mt. Oakan uniquely re-shaped the once great lake, confining it into its present shape.

Today Lake Akan is surrounded by dense boreal forest reminiscent of northern Scandinavia, Russia or Canada. These forests are home to several important wildlife species including Brown Bears, while the lake is home to various rare aquatic species including an enormous salmonid fish known as the Japanese Huchen and the extraordinary spherical algal aggregation known locally as Marimo. For Japanese visitors it is perhaps the iconic Marimo, which is recognised as a Special Natural Monument, that represents Lake Akan more powerfully than anything else. Once the lake has frozen over sufficiently in winter it becomes possible to hike on the ice to admire the astonishing frost flowers that form over night, or to fish for pond smelt through holes cut through the ice.

While visiting the Lake Akan area don’t miss the hike from the Akankohan National Ski Area, up the trail to Mt. Hakuto. The trail leads past another steaming and bubbling bokke and from the easily reached Mt. Hakuto Viewpoint it is possible to grasp the grand scope and scale of the volcanoes, the caldera, and the lake.

A little further afield, though still only 19 km southwest of Lake Akan, lies pretty Lake Onneto. On a clear day the clear waters of this volcanic lake reflect Mt. Meakan. Light and shadow play across the water surface the colour of which seems to fluctuate from blue to green. This is one of the most beautiful scenes in the Akan–Mashu NP. A walk along the path and road beside the lake is pleasant at any time of year, but it is especially delightful in early summer when rhododendrons and other wildflowers are in bloom, and in autumn, when the contrasting coloured foliage of the forest is reflected in the lake, it is spectacular.

Two hiking trails up Mt. Meakan begin in the Lake Onneto area, while a much shorter third trail of about 30 minutes leads from south of the lake to the very special Onneto Yunotaki Falls. Designated as a Natural Monument, Yunotaki is unique because natural manganese oxide (normally found beneath the ocean) occurs here at the surface in the largest recent manganese deposit in the world. It has been formed through the action of special bacteria and algae in hot spring water in a bizarre process known as biomineralization.

Powerful volcanic peaks, beautiful pristine lakes, therapeutic hot springs and traditional culture combine to make the landscape of Akan not only special, but also dramatic. Blend this delightful landscape with its seasonal diversity, which is rich and varied in spring, lush in summer, colourful in autumn, and breathtakingly beautiful in winter, and you have an excellent backdrop for a great adventure travel vacation. 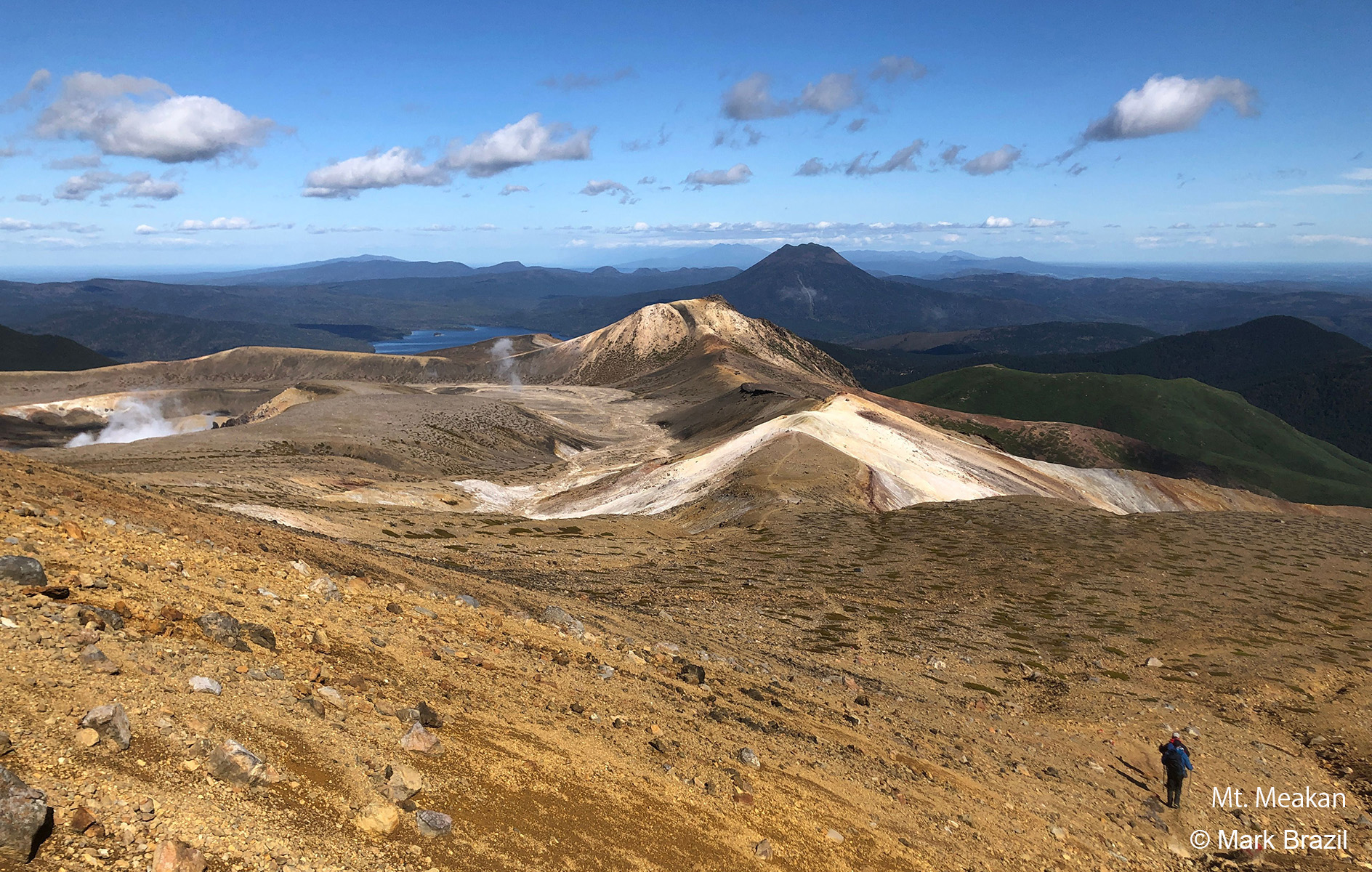 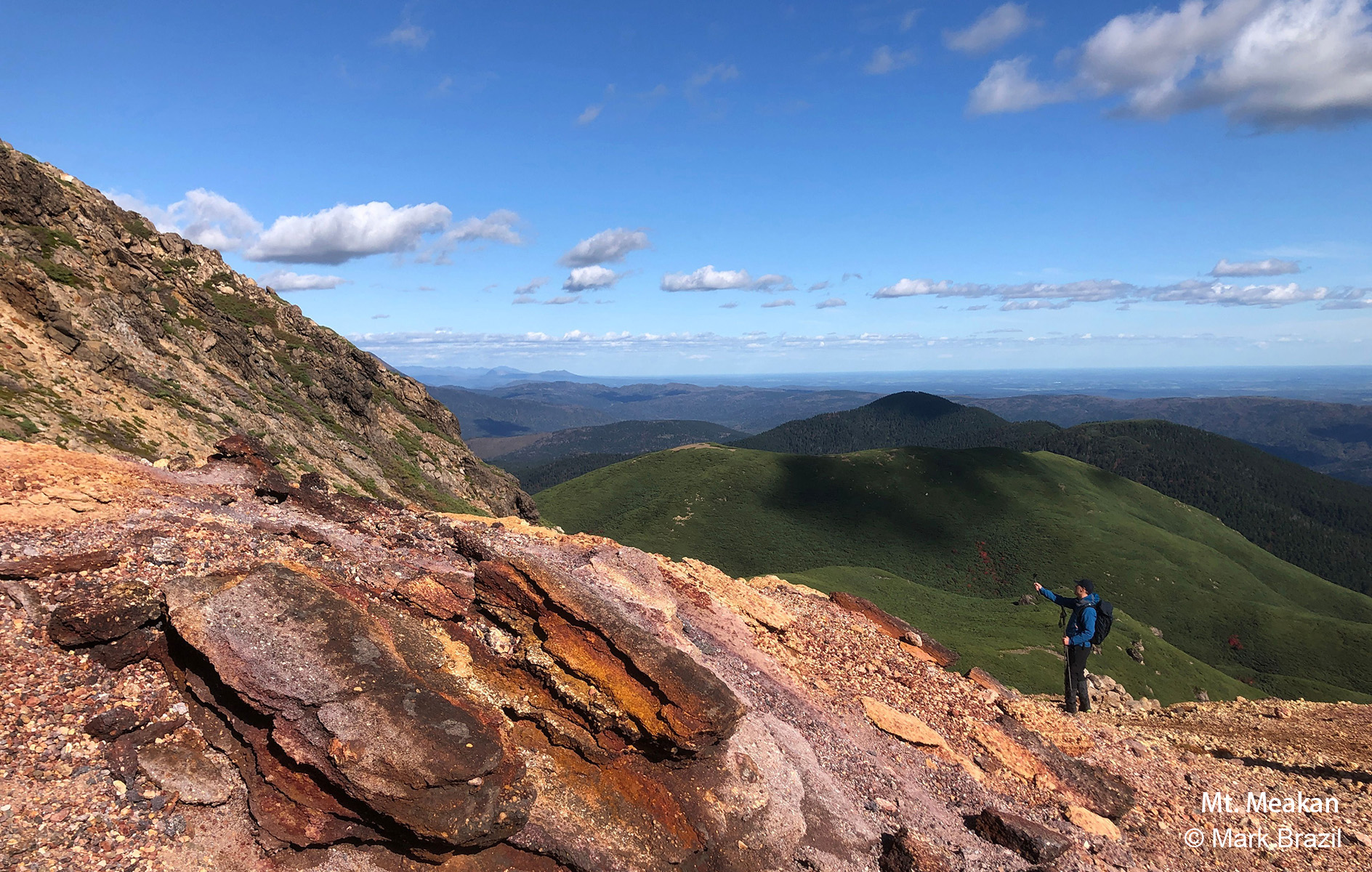 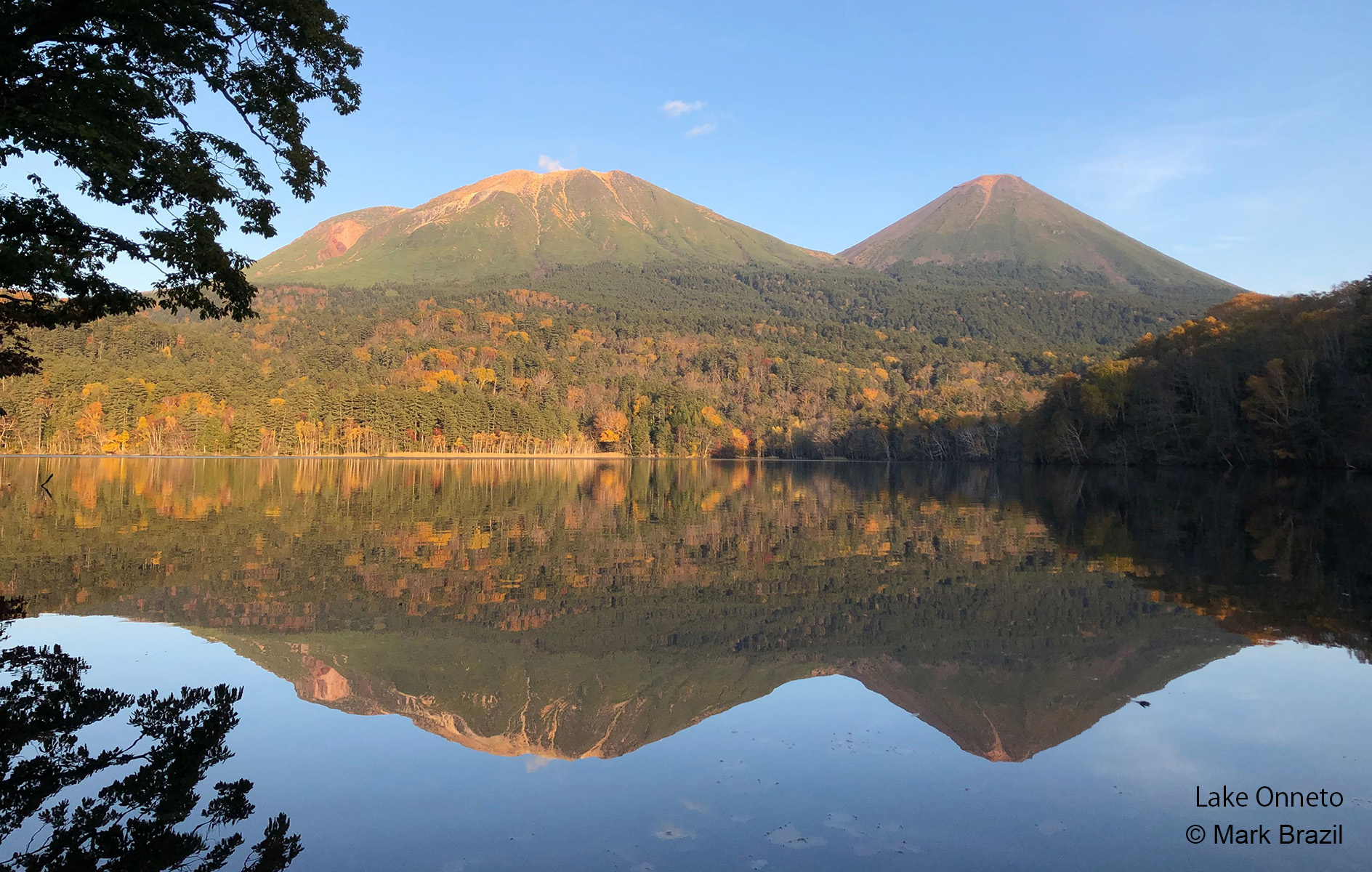 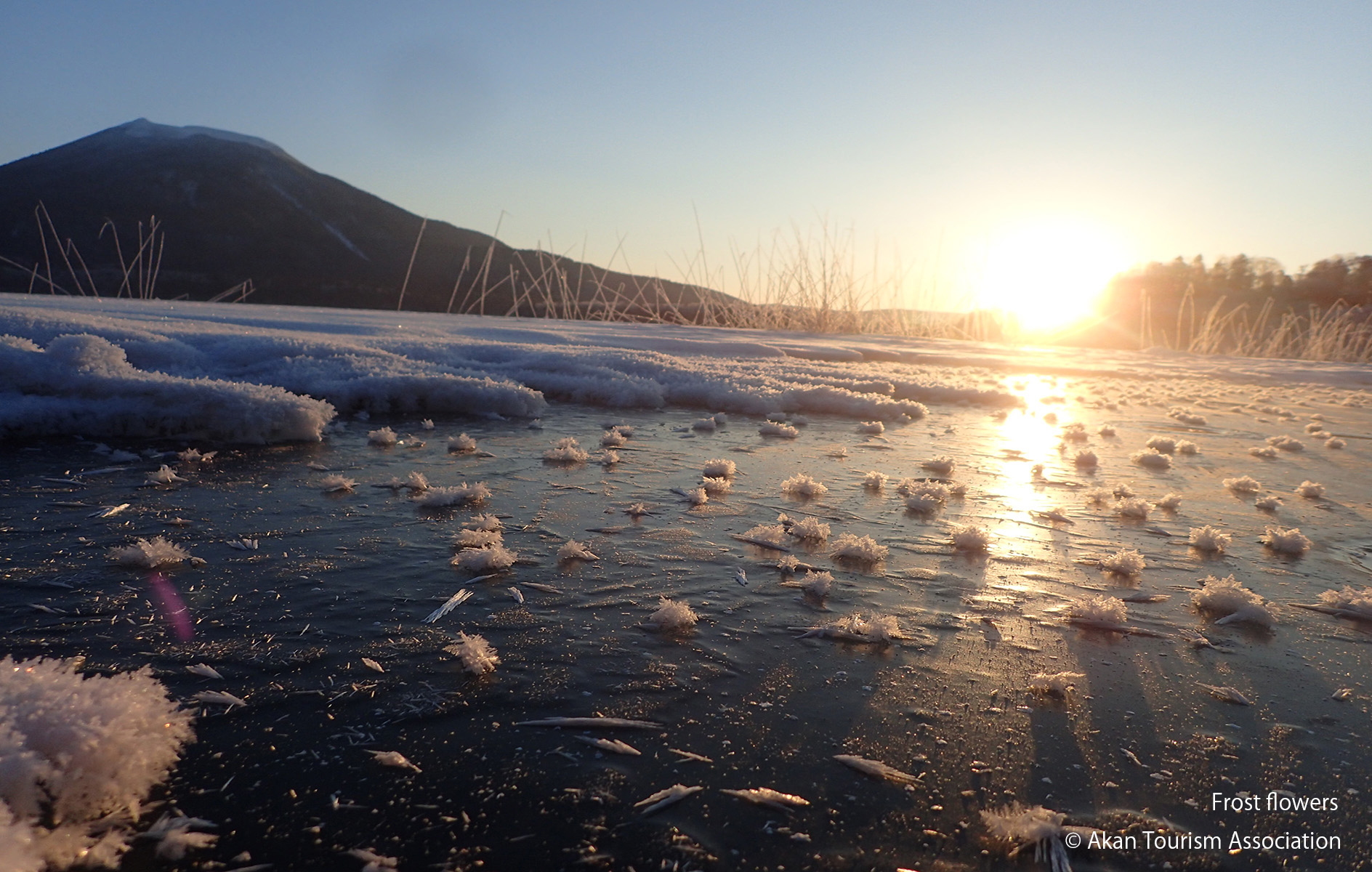 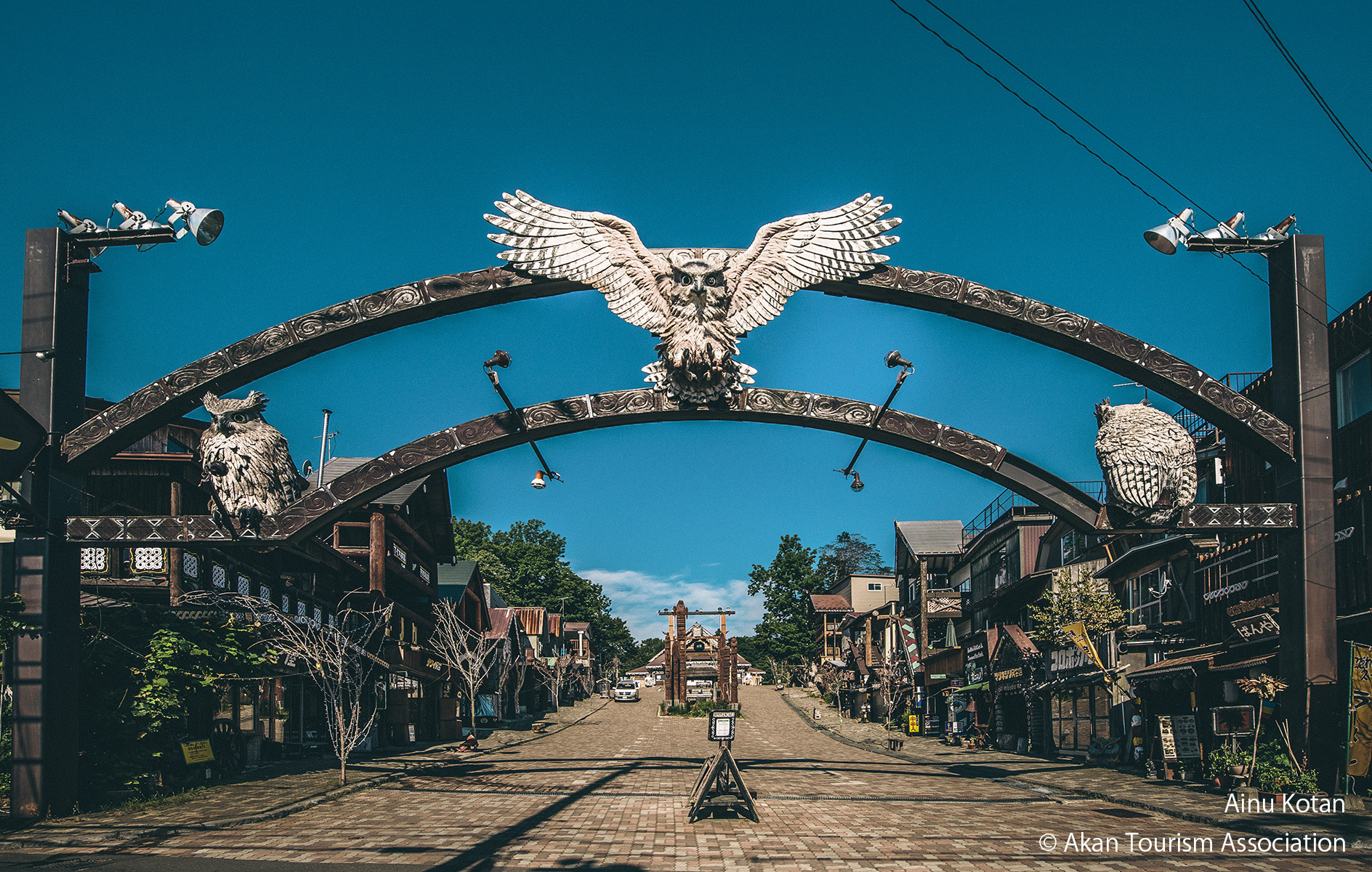 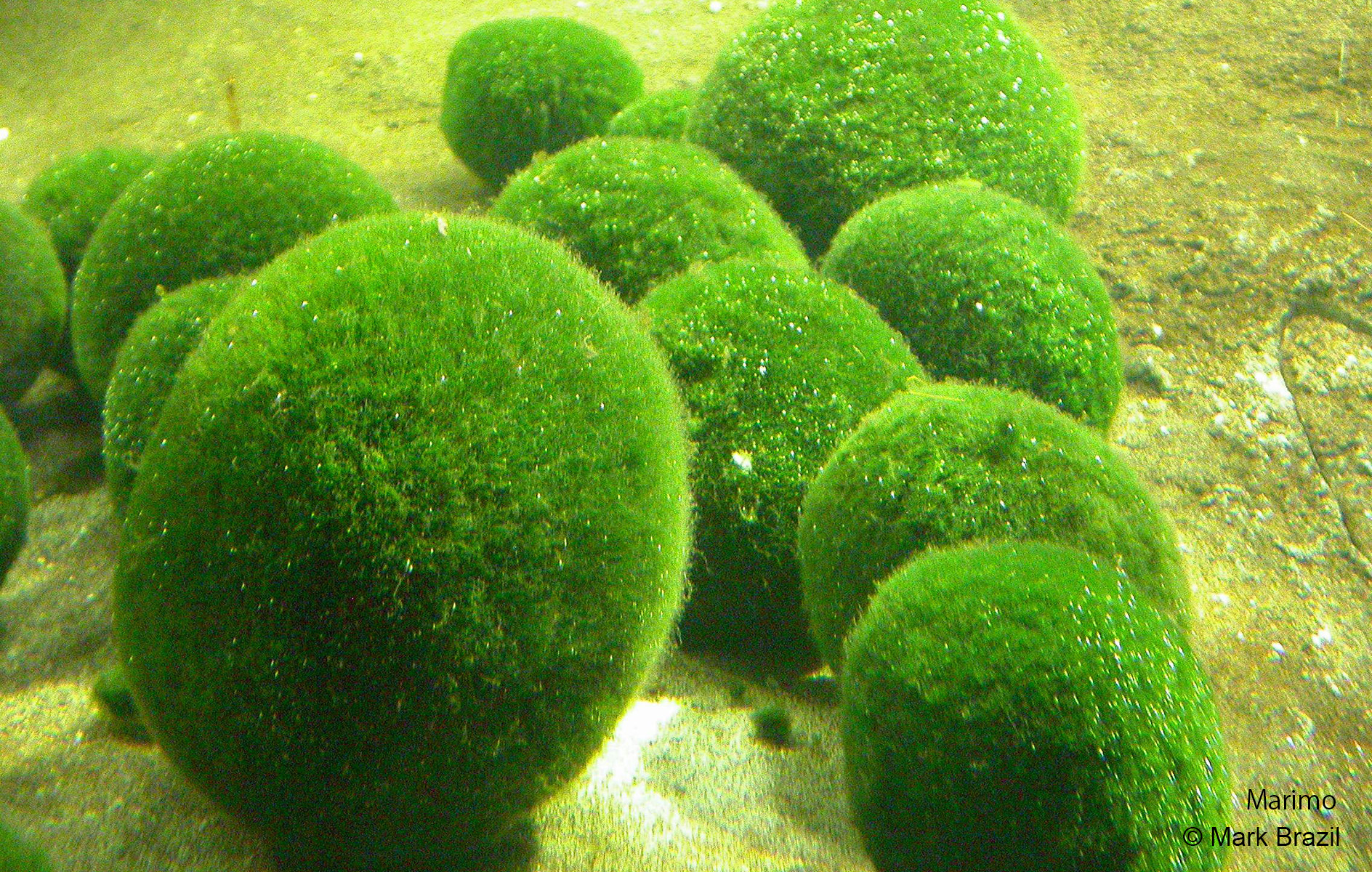